The Holy Catholic Church, which has fought the battles of Christ for eighteen hundred years, is therefore destined to pass through a persecution compared to which those that she has suffered up to the present time are insignificant. St. Augustine classifies them under three general headings. The first he calls violent, on account of the cruelty with which the early Christians were treated by the Roman Emperors, while at a later period the Church suffered from the deception of false brethren, a trial much more insidious than the former, as it was more dangerous. But the persecution of Antichrist will combine both forms and will consequently prove more redoubtable than when one form only had to be contended with. - The Antichrist by the Rev. Paschal Huchede

Link to original site and article in title

I am writing about the No. 187 Fideliter (January-February 2009) devoted to Russia, where you signed the editorial "For Russia reborn", and about the lifting of the decree of Vatican excommunication against the SSPX.

The special feature of the initiative Fideliter is excellent and the articles are good (with reservations about the article in the RP-Marie Damian, for the same reasons set forth below), giving a positive image of Putin's Russia -Medvedev.

Unfortunately, the title of this issue "Russia: toward conversion" and your editorial: "For the rebirth of Russia" suggest that the conversion and the "rebirth" of Russia are not yet completed and it is the best hope that we can do for this country, according to the prediction of the Virgin Mary at Fatima: "Russia will be converted."

At the risk of displeasing you, I will tell you that Russia has already converted, being officially Christian returned since the end of communism and has condemned the Bolshevik Revolution, the Tsarist rehabilitated and Romanov, heroes like Admiral Kolchak, the dissident writers like Solzhenitsyn.

"To want is power." In this case, plead for the conversion of Russia Orthodox to Catholicism, it is not announcing a policy of the SSPX, which does not exist (that is the responsibility of Providence), but associate with the only real and existing policy in this area, which is the Vatican. Now this is not to convert Orthodox Russia to traditional Catholicism, as your readers expect, but the false conciliar Catholicism, Masonic heresy.

The objective of the Vatican, through the ecumenical dialogue / interreligious with the Russian Orthodox Church, is to subvert it in order to destroy Russia as a Christian country and sovereign. Become a Freemason and secular, it will be overrun by Islam as Europe, with a policy of forced migration from the "stans" of the south.

In this census, the strategy of the Vatican is closely associated with Jewish-American policy of global hegemony and the establishment of a new universal religion, the Abbot of MASDU Nantes Noachide or Religion, as you will, the latter being already certified by Public Law 102-14, "Education Day", signed March 20, 1991 by the two chambers and the last U.S. President Bush, on the initiative of the Lubavitch sect of the Pharisees.

This law replaces the Ten Commandments "Sept. Noachides laws" as "cradle of civilization." These laws are Talmudic designation for seven biblical laws given to Adam and to Noah before the revelation to Moses on Mount Sinai, and binding all mankind. The violation of these laws subjects the Noachide to death by beheading, according to the Encyclopedia Judaica , page 1192. I remind you that Benedict XVI had happened last year in the United States the same day as "Education Day", April 15, 2008, before going to the Synagogue of Central Park where he delivered a discourse of "reconciliation" in extension of "Nostra Aetate".

If you look long term, the rallying of the SSPX in Rome is a laboratory for the rallying of the Orthodox and the destruction of Christianity, the main obstacle to the reign of the Synagogue of Satan on the world. The methods are the same as those used for the destruction of Catholicism in England from Henry VIII and his replacement by the Anglican Church subservient to the temporal power.

I also take this letter to express to you my strong disagreement with the statements you made during the Galette des Rois de la Chapelle Notre Dame of Hope to Villepreux. Attributed to the "benevolence" of Benedict XVI with respect to the SSPX, and the million rosaries to the intercession of the Blessed Virgin "success" of the lifting of the decree of excommunication against the SSPX is a sham to hide maneuvers conducted by some of the leaders of the Brotherhood with Rome for its rally, which means the submission of the true Catholic faith to religion Noachide born of Vatican II and that of all the Gentiles to the Kahal.

Be "excommunicated" by the apostate Rome is a title of honor for the faithful of the Society of St Pius X, and this honor is that you want to deprive them more pretext to remove an annoying obstacle in their family and social relationships !

In the words of Archbishop Lefebvre, Rome "lost faith" and Cardinal Ratzinger / Benedict XVI is a "snake". Priests, bishops, cardinals, and Pope himself, from Vatican II are devoid of any legitimate authority because of the invalidity of the sacrament of Order and the heretical nature of the conciliar doctrine. We do not talk to a snake, he crushes the head. The so-called "conversion of Rome" by the SSPX is a joke tragic.

SSPX had no other purpose than defending the true Catholic faith against heresy. You betray one and the other, and the memory of Archbishop Lefebvre, and your faithful are mistaken.

You have unwisely quoted St. Joan of Arc at the end of your letter to the faithful of December 31, 2008 "On Pre-other."

We know that we are the clerics of the Church of France who condemned to the stake.

Sincerely, Father, the expression of my highest consideration.

Posted by SntMartyr at 7:04 PM

This page and all others linked to it — All copyrighted sources are quoted and used for comment and education in accord with the nonprofit provisions of: Title 17 U.S.C., Section 107. These sites are in accordance with Title 17 U.S.C., Section 107 and are protected under: The First Amendment Congress shall make no law respecting an establishment of religion, or prohibiting the free exercise thereof; or abridging the freedom of speech, ….

The War of Antichrist against the Church and Christian Civilization 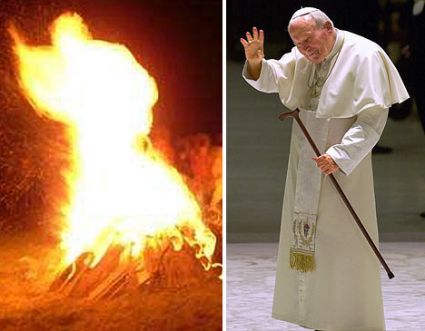 The Plot Against the Church - Has already come to pass